THE GUARDIAN COUNCIL AND ITS ROLE IN IRANIAN ELECTIONS 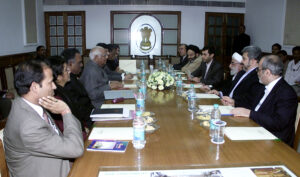 On the 21st February 2020, Iran held its 11th parliamentary election since the 1979 Revolution. It resulted in a strong victory of the conservative faction, loyal to the Supreme Leader Ali Khamenei. Thus, the election seems to repudiate the policies of the President Hassan Rouhani, frequently described as a moderate, and further reducing the possibilities of safeguarding the nuclear agreement. The voting turnout was the lowest since the birth of the Islamic Republic, only 42.5 percent, almost 20 percent less than the 2016 parliamentary election, and in the capital, Tehran, only about 25 percent of the population voted. As it was the first time that the turnout dropped under 50 percent, the Supreme Leader explained this fact by referring to the threat of coronavirus, as the first case in the country was confirmed only two days before the ballot.

However, experts believe that the reason of such a low turnout should be found elsewhere, mainly in the decision of the reformists to boycott the elections due to the limited choice of candidates. In fact, 7,296 candidates, in particular reformists and moderates, were not allowed to take part in elections because the Guardian Council, a constitutional body who has the power to veto the electoral candidates, disqualified them. In this case, even 90 members of the current Majles-e Showrā-ye Eslāmī, the Islamic Consultative Assembly, were not allowed to run for the election. As a result, it might be interesting to understand the role of the Guardian Council in Iranian structure of power, as it is even considered among the most significant institutions, due to its hybridity both in terms of membership and in terms of functions.

Under article 91 of the Iranian Constitution, the Guardian Council consists of twelve members who hold office for six years. Its composition is based on two principles, the theocratic and the parliamentary, an element that reflects the structure of Iranian constitutional system as a whole. Six of its members are Islamic Jurists (faqih), appointed by the Supreme Leader, and must be righteous and aware of the demands of the time and problems of everyday life. The other six members are lawyers. They are experts in different areas of law and elected by the Majles from a list of Muslim lawyers recommended by the Head of the Judiciary.

Under the Iranian Constitution, the Guardian Council can be considered as a hybrid institution, a mixture of a judicial court and a legislative chamber. Thus, it does not only have the power of vetting the candidates for elections, but the Constitution provides it for a number of other competences. On the one hand, it is staffed with jurists who take decisions on the basis of law and fulfil judicial tasks. It interprets the Constitution like a constitutional court. On the other hand, the Constitution presents the Guardian Council in the chapter on the Islamic Consultative Assembly, not in the one of the judiciary. Furthermore, it is different from the other constitutional courts as its decisions are neither binding nor final.

Therefore, the Guardian Council has different powers. First, it reviews the bills of the Islamic Consultative Assembly regarding their compliance with Islamic ordinances and the provisions of the Constitution, according to art. 91 in conjunction with art. 72. All bills of the Majles have to be submitted to the Council. If the Parliament refuses to make corrections, the matter shall be submitted to the Exigency Council, another institution whose members are appointed by the Supreme Leader. The other central duty of the Guardian Council is the interpretation of the constitution with the majority of two-thirds of all its members, under art. 98.

However, the most relevant and discussed power of the Guardian Council is the supervision of the election of the Assembly of Experts, the presidential election, the election of the Islamic Consultative Assembly and the referendums. After the death of Khomeini, the Guardian Council interpreted its supervisory role as a power to veto the candidates for the Majles on whose qualification the Constitution is silent. Concerning its role in the context of elections, art. 99 uses the word nezārat, which means supervision. This word was interpreted in different ways. Ali Montazeri, former designated successor to the Supreme Leadership under Khomeini, thought that art. 99 wanted to prevent instances of partiality or corrupt practises, without empowering the Guardian Council to constitute a process of vetting of its own. However, the Council interpreted it claiming full supervision and approval, a position shared by Khamenei too. Thus, Iranians can run for parliamentary elections only if they are between 30 and 75 years old, hold at least a Master degree or equivalent, have finished their mandatory military service (if they are men) and have shown their commitment to Islam, with the exception of those running for the five seats reserved for religious minorities. If there are doubts about the candidates’ loyalty toward the maxims of the Islamic Republic, they can be excluded prior to the ballot, as we saw in the 2020 Parliamentary election.

In conclusion, the Guardian Council has often acted as a protector of the status quo. Before the last parliamentary election, its decision to reject some candidates caused some unhappiness in Iran; for example, leaders of reformist parties criticised the Guardian Council for disqualifying many reformist candidates and even the President Rouhani said: “all of those whose qualifications are endorsed by the Guardian Council come from the same faction: the hardliners”. Therefore, due to its fundamental role in the country’s electoral process, the Guardian Council seems to represent one of the main institutions in the structure of power of the Islamic Republic of Iran.