PRESIDENTIAL ELECTIONS IN ECUADOR: BETWEEN SOCIAL PROBLEM AND VOTE INCONSISTENCIES 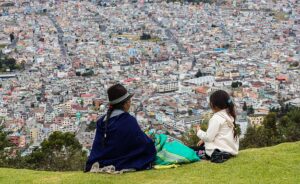 On the 7th of February, the Republic of Ecuador held the first round of general elections to vote for the new president succeeding to the former center-left president Lenin Moreno, elected in 2017. Indeed, the country is a Presidential Republic and the head of state remains in charge for 4 years. Ecuador has universal, compulsory voting for citizens aged between 18 and 65, and according to the statistics the voter turnout was around 80%.

The Latin-American country is currently dealing with several different problems. 21.2% of the population lives below the poverty line, and the employment rate has plummeted from 48% at the beginning of 2020 to 39.3%. During Moreno’s presidency, the national public debt has significantly raised, passing from 26% to 44% of the GDP. The austerity policies adopted by the former president succeeded in curbing the expenditure and the country furtherly asked for a loan to the International Monetary Fund. Moreover, government data underlines that the Covid-19 Pandemic has increased pressure on economy, with 6.4$ billions of loss to be attributed directly to health crisis, and the vaccination campaign has only covered 0.1% of the population so far.

According to the Ecuadorian Constitution, if no candidate gets at least 50% of votes, or at least 40% of votes with a 10% margin over the runner-up, the two most voted candidates heads to runoff, which will take place the 11th of April.

The prominent candidates who received most of the votes are mainly three: Andres Arauz, Guillermo Lasso and Yaku Perez.

Andres Arauz is an economist and he also served as a minister of culture between 2015 and 2017. He studied in Mexico and in the United States, and he is affiliated to a wider left-wing coalition called Union for Hope (Union por la Esperancia, UNES).

Guillermo Lasso is the former economy minister and he was also named the head of the operations in Ecuador for Coca Cola, following the bankruptcy of the company in that region. He is the founder of the center-right political party Creating Opportunities (Creando Oportunidades).

Yaku Perez is the third candidate running for the presidency. He is an indigenous rights and human rights activist, and he also worked as prefect of the province of Azuay. He runs along with the eco-socialist party Pachakutik Plurinational Unity Movement, which aims to give voice to indigenous peoples’ organisations throughout Ecuador.

The 21st of February the National Election Council (CNE) officially announced the results. Andres Arauz received 32.72% of votes, followed by Guillermo Lasso and Yaku Perez. The body affirmed that the former two are heading to the second round in April.

However, Yaku Perez affirmed that 16.000 elections return had inconsistencies, claiming that the ballot boxes opened in Guayas province (the most populated one) and other provinces were tampered during the counting of the ballot. He also organised, together with indigenous organisation, a pacific 700-km march from Loja to the CNE building in Quito to protest against the alleged inconsistencies. For the moment, the National Election Council partially admitted the claim, asking for a new count of 30 polling stations in the provinces of Guayas and Los Rios.

Two months are left to the to the presidential runoff, but it is a long way and it has just started.