NAMIBIA AND GERMANY: A CONTENTIOUS ACCORD IN THE GRIP OF THE PANDEMIC 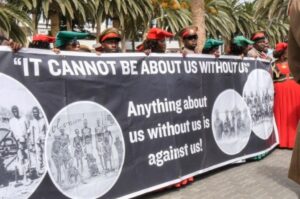 In a medium range perspective, June 2021 might yet proof a turning point for Namibia, a moment when multiple crises in different fields have entangled. At first sight, these crises may appear as hardly connected, but they have criss-crossed not just coincidentally, but at least in part also for structural reasons. As a tragic symbol, on June 24 Dr Zedekia Nguavirue deceased, a veteran of the liberation movement and special envoy for the negotiations between the Namibian and German governments.

In the beginning of the sequence that is of interest here, it became known that the negotiations about the consequences of the genocide of 1904-08 in what was then German Southwest Africa had reached a conclusion. Immediately when the accord, known as a “Joint Declaration” had been initialled, particulars seeped through, and thus even before the officially observed silence had ended, the first adamant protests where voiced, in particular in a joint statement the Ovaherero Traditional Authority (OTA) and the Nama Traditional Leaders Association (NTLA).

Days later, it was confirmed that in the accord, the German side had recognised “that the abominable atrocities committed during periods of the colonial war culminated in events that, from today’s perspective, would be called genocide.”.[1] The tortuous, round-about wording of this acknowledgement kept with the established line of German diplomacy, studiously to avoid any statement that might be binding legally and result in obligations for reparation. This, the Declaration continues: “Germany accepts a moral, historical and political obligation to tender an apology for this genocide and subsequently provide the necessary means for reconciliation and reconstruction.”. Such obligation is to be honoured in the form of a ‘grant’ of € 1.1 bn, to be paid in 30 yearly instalments. This programme is considered explicitly in the context of “development of descendants of the particularly affected communities.”.

Not only are these groups in this way framed as under-developed and thus, as objects of classical modernisation efforts, but the entire arrangement appears integrated into the general run of development cooperation – for decades, such an approach had been vehemently opposed by victim communities.

Accordingly, objections have been levelled on the one hand against the paltry sum of the grant which is considered as deeply undignified and inappropriate. Also, the appropriation of these funds to specific fields ranging from infrastructure through memory politics is critiqued, since victim communities were not consulted. The other objections have been known for the entire five and a half years the negotiations were dragging on – they were foreseeable and have been consistently ignored by the negotiators. Chiefly, these objections revolve around the denial to the victim communities of an independent role at the negotiating table, in line with the mantra, «Not About Us Without Us!».

In this way, activists and traditional leaders had all along challenged the right and competence of the Namibian government to represent their concerns about the genocide vis-a-vis the German government. To do so, they claim, only they themselves are entitled and able. They refer to the resolution by the National Assembly of Namibia in October 2006 in which the government was asked, in their view, to facilitate, not to conduct negotiations with Germany to reach an adequate recognition, apology and reparations.

The negotiations had come underway after the German Foreign Office had given up on its long-term stance to avoid the term «genocide» by all means. Still, as also in the present accord, they stressed such a recognition was limited to a «historical and moral» dimension.

Contrary to expectations, e.g. voiced by German special envoy Ruprecht Polenz, the negotiations did not end after mere three rounds. This was due to an in-built stalemate: On the Namibian side, despite grave cleavages on other issues, there was consensus that Germany was obliged to pay reparations. This idea relates both to African concepts about justice and reconciliation, and to principles of transitional justice when it comes to crimes against humanity. Refusal creates serious obstacles to reconciliation. Significantly, indications are that in the German Foreign Office, such refusal is motivated by fear of creating precedence, also in relation to pending claims emanating from World War II, as pursued by states and survivors in Italy, Greece and Poland.

Such consensus in Namibia contrasts with the countervailing claims raised by victim groups on the one hand and maintained by the state on the other when it comes to who should negotiate. As mentioned, the former insist on the National Assembly motion of 2006, but they also point to their minority position in present-day Namibia as a demographic consequence of the genocide, which in their view results in a status of indigenous peoples and consequently, a claim to the rights enshrined in the relevant UN Declaration of 2007 and the ILO Convention of 1989. They argue further that the “diaspora” of Ovaherero and Nama, who as a consequence of the genocide today live outside the Namibian borders, mainly in Botswana and South Africa, cannot possibly by represented by the Namibian government.

The majority of the victim communities refused the invitation of the Namibian government to be involved in the negotiating process by joining various technical committees who advised the negotiating team. In opting for this possibility, once again a long-term rift amongst Ovaherero came into the open between followers of the popularly elected ombara (paramount chief) on the one hand and the Royal Houses on the other, who claim genealogical legitimacy.   The latter accepted the government offer as did individual Nama, mostly with extremely shaky credentials. German participants pointed repeatedly to the presence of Ovaherero and Nama during the negotiation rounds, without bothering with the question whom these persons represented. When a rage of protest broke lose in Namibia after the accord became known, the Foreign Office claimed simply that the negotiations were now over, and it was the responsibility of the Namibia government to deal with the situation.

They did not get off the hook so easily. First, the Foreign Office was under constraints to disinvite the journalists who, under the shroud of secrecy had been asked to attend the signature ceremony planned in Windhoek for early June. Under popular pressure, as well with the opposition clamouring in the Namibian National Assembly, such a ceremony appeared no longer as opportune. Then, in Namibia, even the Vice President under whose responsibility the negotiation process had been conducted, himself claimed, against German pronouncements and the letter of the Joint Declaration that the accord gave room for renegotiations about the sum of the ‘grant’ to be paid by Germany. Even the Namibian government felt this was too little.

In this way, there is a clear impression that after a protracted duration – even though Covid-19 restrictions also had contributed – the negotiations were under considerable pressure to be concluded. The Namibian government quietly shelved the inner-Namibian consensus about reparations and let do with a much smaller sum compared to their demand as had seeped through at an earlier stage.

On the German side, the sudden haste may be explained by the impending federal elections end of September 2021, while Namibian critics point to the extremely delicate position of state finance, which might be improved by a German commitment. A further consideration is the erosion of legitimacy enjoyed for a long time by the ruling party since independence in 1990, transformed from the liberation movement, SWAPO. After SWAPO sustained considerable losses in the national elections in late 2019, one year later, in the regional and municipal elections, some regions, mainly populated by victim communities, as well as the capital of Windhoek and other important towns were won by opposition parties.  An important factor in this erosion of legitimacy was the dramatically spreading corruption, highlighted in a scandal around the allocation of fishing quotas that went public shortly before the 2019 elections. Ever since, two former cabinet ministers remain in custody. Persistent rumor has it that the SWAPO congress which elected Namibian President Hage Geingob also as party president was heavily doctored by the use of money from the “fishrot” deals. The apparent legitimation crisis is exacerbated by these developments as well, from a totally different side, by the protests against the negotiation results.

Since mid-June 2021, all of this has been shoved aside by the painful wave of the covid-19 pandemic.[2] Important protagonists fell victim to it, including Ngavirue and Herero Ombara Vekuii Rukoro, one of the staunchest opponents of the accord. Doubtlessly, it hit mostly the poor. Still, prominent deaths not only impact on diplomatic proceedings, but underline what a “special responsibility” for Namibia as constantly mouthed by German diplomacy might actually mean.  In a situation of daily rising tragedy, commitments are acknowledged, but help promised only within several weeks[3].

[1] Joint Declaration by the Federal Republic of Germany and the Republic of Namibia, https://www.dngev.de/images/stories/Startseite/joint-declaration_2021-05.pdf .

[3] Here a few hints to get different perspectives on the topic, among the many: European Center for Constitutional and Human Rights, “The ‘reconciliation agreement’ – A lost opportunity”, June 2021, https://www.ecchr.eu/fileadmin/Hintergrundberichte/ECCHR_GER_NAM_Statement.pdf; N. Onishi, M. Eddy, “A forgotten genocide: what Germany did in Namibia and what it’s saying now”, in New York Times, 28 May 2021, https://www.nytimes.com/2021/05/28/world/europe/germany-namibia-genocide.html?searchResultPosition=1.