AFGHANISTAN AWAITS THE RESULTS OF THE PRESIDENTIAL ELECTION 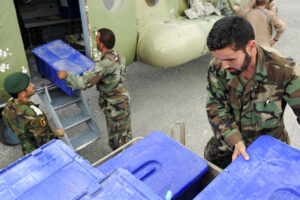 The Afghan presidential election took place on 28th September 2019, but preliminary results will not be determined until 19th October and the final results until 7th November or later. Twice delayed since the original date of 20th April, the fourth presidential election of the Islamic Republic of Afghanistan was held at about 4,500 polling sites, approximately 2,500 fewer than in 2014 due to the spread of violence. As a result, the turnout might be an historical low.

Indeed, 9.5 million of Afghans in a population of 35 million registered to vote, but the initial tally, released on Sunday by Afghanistan’s Independent Election Commission based on data from slightly more than half of the polling stations, showed that under 1.1 million Afghans had voted, while during the 2014 presidential election the turnout reached 60 percent. In order to allow more people to cast their vote, the time for voting was extended and the election commission took some steps as a way to instil more confidence in the electoral process: the commission tried to ensure a cleaner vote through mandatory registration and the use of a biometric verification process that required the voter’s fingerprint and a photo. However, there were some technical problems and many citizens who claimed to have registered were not actually able to vote. As a result, even though an official rate has not been announced yet, it might be of less than 25 percent of the registered voters, much lower than any other presidential election since the fall of the Taliban in 2001.

Many factors contributed in this low turnout. First of all, Afghans were mainly concerned about security, given that the voting queues could be easily targeted by the Taliban, which had vowed to stop the elections. So, more than 70,000 soldiers and police officers were deployed in order to protect the electoral process, while commando forces carried out dozens of special operations in the days before the vote. Luckily, the security forces seem to have prevented any mass-casualty assaults, but it is extremely complicated to understand the precise number of civilians and members of the security forces which were killed or wounded during dozens of smaller attacks on the day of the elections. While the Interior Ministry said 68 attacks had been carried out on elections targets, causing the death of three police officers and wounding 37 civilians and two army soldiers, the figures which were broadcasted by other sources show a more critical election day. From conversation with local officials across the country, The New York Times determined the killing of at least 30 security personnel and 10 civilians and the injuring of at least 40 security forces and 150 civilians. The Afghan Analyst Network announced that more than 400 attacks were reported across the country on 28th September, while the Taliban claimed to have conducted 531 attacks.
Secondly, just one in five Afghans have confidence in the honesty of elections in their country. This figure, while showing a sharp decline from 2009 when a third of the population expressed confidence in the electoral process, reflects a 10-percentage point improvement from last year.
Furthermore, satisfaction for basic services has declined in recent years, mainly with regard to the quality of the educational system, the availability of health care and the quality of water.
As a result, the new president will have much work to do in order to improve the stability and security of the country and the faith of the population in the institutions. These tasks will be probably carried out by one of the veterans of Afghan politics. In fact, among the 16 candidates to the presidency, two of them seem to have more opportunities to win: the incumbent President Ashraf Ghani and the Chief Officer – a position that encompasses prime ministerial powers – Abdullah Abdullah. Even though both of them built large coalitions, aiming to obtain the support of different ethnic groups, it is probable that neither candidate will get the required 50 percent in the first round, facing a run-off. The two possible winners are not neophytes in this kind of competition: both were candidates in 2009 presidential election, won by Karzai, and in 2014 when they found a difficult compromise which led to the formation of the actual government.

Due to the variety of ethnolinguistic groups in the country, the candidates built large coalitions in order to respect the so-called “laws of ethnic inclusivity”: most teams include a Pashtun, a Tajik and an Hazara, the largest ethnic groups in the countries. At the same time, they also try to include non-official vice presidents in order to gain the support of minorities, like the Uzbeks and the Turkmens.

President Ashraf Ghani is favoured to win. The President, aged 70, is an American-educated anthropologist who formerly worked at the World Bank. In 2009 he ran for the first time for office but got about 3% of the vote, then he became president after 2014 disputed elections. He casts himself as the “state-builder”, asking for a second term to ensure to build strong institutions in Afghanistan, but, because of his behaviour, he is sometimes accused by its opponents to act as a dictator. From an ethnic point of view, Ghani appointed as candidate vice president Amrullah Saleh, a Tajik, which was the head of the National Directorate of Security by President Karzai, Minister of Interior Affairs between December 2018 and January 2019. He is appreciated also by Pashtun, the main group of supporters to Ghani and the 42% of the population. Ghani’s team also see the presence of an hazara, a community which has not probably voted for him.
Abdullah Abdullah, aged 59, is an ophthalmologist who rose through the ranks of the anti-Soviet fighters. After the fall of the Taliban regime, he became minister of Foreign Affairs and ran for presidency in 2009 and 2014. Sometimes negatively described as a politician with a “European style” given its attitude to compromise, he wants to present himself as a moderate leader who can work within a broad coalition. His team includes exponents of different ethnic groups. Abdullah is at the same time identified with the Tajiks, his mother’s ethnic group, and the Pashtun, his father’s one. He also has the support of the Hazara, which refuse to accept the permanent presence of a Pashtun president. He chose wisely his vice presidents: an Uzbek and an Hazara, clearly showing his willingness to obtain the support of ethnic minorities.

Both front-runners claimed to have enough votes to win. However, the lack of any reliable exit poll does not allow us to understand who the winner will be until the 19th October. In the meanwhile, the US Embassy in Kabul has called to respect the time required for the Independent Election Commission of Afghanistan and the Electoral Complaints Commission to deliver accurate and transparent results and the UK Embassy has showed its support to the independence of electoral bodies. Hopefully, these recommendations will be followed.